Once this pandemic is over, I’ve made a vow to become much more of a free-range parent. I want my kids out of the house, free to roam, and the […]

Once this pandemic is over, I’ve made a vow to become much more of a free-range parent. I want my kids out of the house, free to roam, and the only instruction I want to give them is to “be home for dinner.” If I’m feeling particularly tired or annoyed with them, I might even say “Come home when the street lights come on.” Sound familiar? That’s the life that many of us lived. And a luxury that many of the children of today’s generation (even those of yours truly) have lost, to some extent. I think that after six weeks of sheltering in place, we’re all feeling to put it politely, the need for a little more, ahem, space. 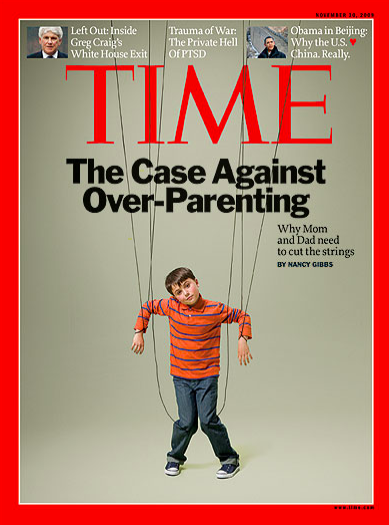 Parents that were already “free-range” pre-pandemic, were likely forced to pull in the reigns a little over the course of the past two months. Helicopter Parents likely didn’t make it off the helipad.  The result is that we’re not all that pleasant to be around any more. We’re stressed, irritable and itching to get back to routine. But when you look around the Globe, you’ll see that as painful as this physical distancing piece has felt, and regardless of how tense the dynamic that’s resulted from sheltering in place with our loved ones may be, we’re really not suffering as much as others. 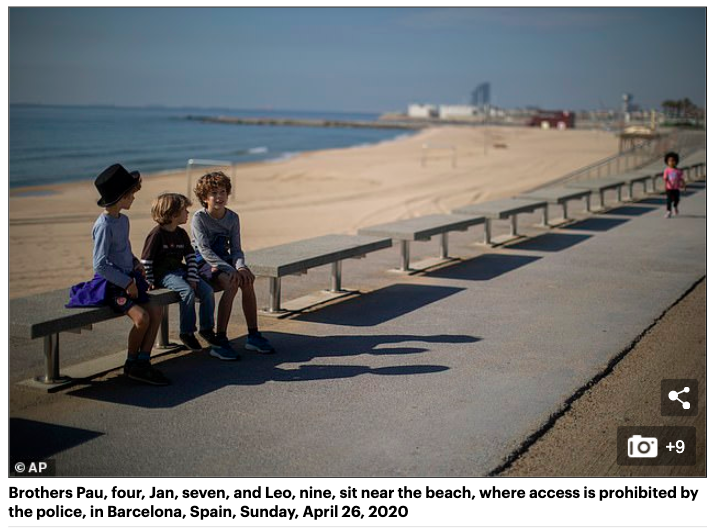 Consider Spain. This past weekend was the first time since mid-March when authorities in Spain implemented a nationwide lockdown, that children were permitted to go outside of their homes – with certain stipulations of course, which happened to be a time limit of ONE HOUR. Millions of children were stuck at home (with exemptions for children with health issues). No short walks around the block. No trips to the grocery store. Nothing. The reason? Health experts were concerned children would spread the virus to vulnerable elderly. But there was the other side of health specialists and parents who disagreed. They showed their teeth when there were rumours that it could extend into May, and the pressure they applied must have worked, as we can see restrictions are gradually being lifted.  Those who protested worried about the long term consequences that being inside had on their children’s mental and physical health. Not to mention the challenges in explaining to the children that “Yes, dogs can go outside, but you’re not allowed.”

What I struggle to understand, is how we ended up fighting for and longing for something that we willingly gave up in the first place. Over the past four generations, our kids have for the most part lost the “right to roam” as described in a report by Dr. William Bird, and published in the British Daily Newspaper in 2007, as Health Adviser to Natural England.

The report focused on four generations of one family and measured the habits and roaming distance of each. We’re all familiar with the stories. When our great grandparents were children, they regularly walked six miles to the school (yes in the snow of course) with no supervision. In today’s world, that almost doesn’t exist. On average – the roaming distance for children in each passing generation has shrunk, as has their independence. 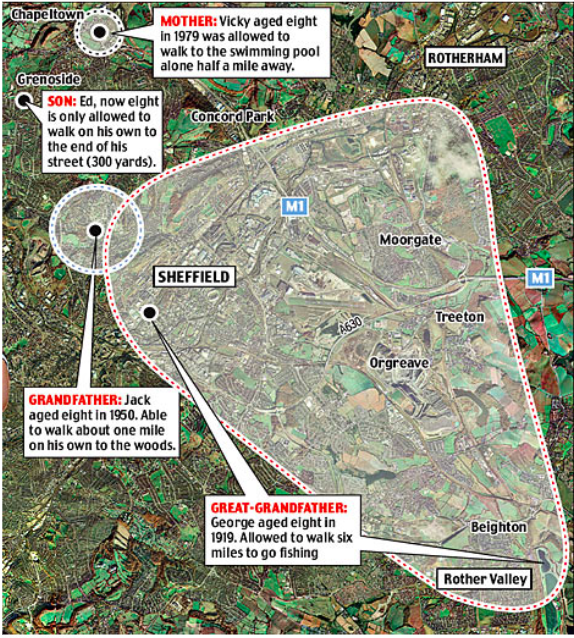 Dr. Bird’s claim is that if things don’t change, children’s long-term mental health is at risk, stating that people are healthier and better adjusted if they get outside into the natural world. And the science backs it up.  “If children haven’t had contact with nature, they never develop a relationship with the natural environment and they are unable to use it to cope with stress.”  They’re also more likely to suffer from stress and depression if they don’t have unsupervised time outside.”

Well, well, well. Is it any wonder our kids are bouncing off the walls during COVID-19?  But it turns out that not only is being cooped up not good for us. It’s actually proving to be unsafe. As most parents are still working virtually while their kids are adapting to online learning, there are of course, gaps and spaces during the days. For parents, this time is already insufficient, and easily drained by an abundance of “adult-like” things to take care of. For the kids…. well, they fill their idle time however they see fit.  It turns out that’s just what kids do. But they’re doing it in the wrong place – inside. Or they’re doing it with an added level of intensity from pent up adrenaline. In our home, with three young boys, that most often takes the form of wrestling for some reason.

The good news, is that this isn’t just happening in my house. It’s everywhere. Which of course, makes me feel a huge wave of relief. According to last week’s pullout section of the New York Times, “Parenting during a pandemic”  – this is all actually quite normal. Parents can only multi-task to the best of their ability.  And kids will always be kids and do what they can get away with. “They are climbing on things they shouldn’t be, riding bikes without helmets, doing somersaults on trampolines and throwing dangerous objects at their siblings.”  (Admittedly sounds a little like my place, but so far, I’ve been lucky).

“You can’t work and provide adequate supervision, especially for younger kids, so something’s got to give.” said Dr. Benjamin Hoffman, Chair of American Academy of paediatrics Council on Injury. His most recent treatment during the time of the interview for the column was from a “wrestling” incident in someone’s home. (No – not mine.) And while the data isn’t conclusive yet,  as it’s still early, the anecdotes are certainly leaning in the direction that less time outside is positively correlated to more injury. They are predicting a spike, but the numbers even when they do come in, may not be accurate. We know that COVID-19 has been a deterrent in people visiting hospitals for treatment. (Confession – I’ve told my own three sons during their wrestling matches that if they draw blood, they’ll have to stitch themselves up as I am NOT going into an ER , despite the reassurances.)

We’re six weeks in. We’re tired. We’re at each other like never before. And we don’t know how much longer this road is going to be. But what I do know is that when I get to the end of it, I’lll be tossing my kids outside to explore, to do as they wish, to get out of my hair, and to (hopefully) stop fighting.

And no – I won’t be throwing a tracking device on them. While they each have a device, and I therefore have the ability to track their location… I don’t. I have made them that promise. I’ve actually made myself that promise. I will trust them until they give me a reason not to. I realize I may be an anomaly. Fortunately I’ve only had to rely on it once or twice for my oldest son in what I thought was an emergency.

Jessica Grose ’s recent article on the rise of location trackers for kids referenced NPD’s market research that the smart watch industry in the US has reached $5 Billion in the US alone and is expected to grow 18% this year. It’s growing despite concern that it may be interfering with our children’s ability to develop autonomy and responsibility. It’s growing despite the fact that it interferes with what I’d consider to be a pretty important parental process – learning to trust your child  (not a device.)  Grose also reminds us that statistically, children are safer by many measures than they were 50 years ago.

With all of these things combined, you may be able to understand the appeal of the free-range parenting model. Not everyone can get there though, and I get it. It’s a big leap and a far stretch from the world that most of us live in – a world that’s almost unrecognizable from the one that we grew up in.

But that doesn’t mean it’s not something worth fighting for.

Perhaps one of the gifts of COVID-19  is that is has allowed us to reflect back on a time when we had a little more freedom, especially as children. When we see children in containment and wonder what it’s doing to them (while knowing what it’s doing to us) you can’t help but wonder if they’re well equipped for another black swan. What if the internet went down during this pandemic? It’s a place I don’t like to allow my mind to go to very often. But we should perhaps start to wonder if our kids would be resilient enough to deal with it. Would we?

Think of a simple thing such as parks being closed. Why was it so difficult for people to listen and to stay away, particularly during nice weather? Could it have anything to do with the fact that most  kids don’t know the simple pleasures of climbing a tree or skipping rocks in a ravine? And even if they did, would their parents let them? Unsupervised? 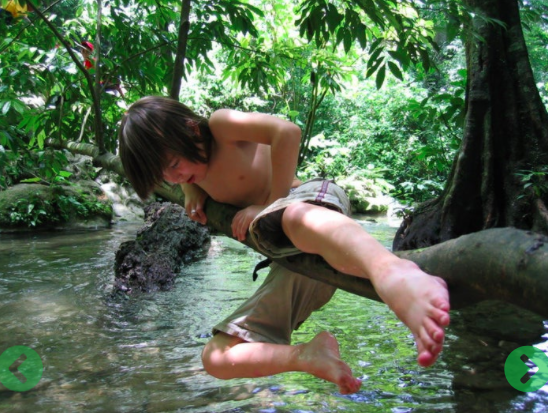 We have a lot of work to do it seems, when it comes to parenting. But as you can see, not all of it has to be done my parents themselves. There’s this thing called mother nature that can help out. There’s also this thing called community that can help, if you build it right. You might remember a time when neighbours knew each others names, doors were left unlocked and you could walk into your friend’s home almost as though it were your own.

And while parenting is of course a personal responsibility – I also have the responsibility and opportunity to bring that lens into decisions that land in my professional world. Where we are literally building communities and where I can remind people of these types of places and the importance of designing them as such.  Places that feel safe, inclusive and allow for a sense of belonging. Places that resemble homes and neighbourhoods to those that many of us  grew up in.

Sometimes we love to look ahead and we brag about being able to see around corners. But sometimes it’s equally important to look back. While innovation has made us better in many ways, we may want to pause and see if there were lost treasures and insights that we left behind.  To me, they’re worth fighting for, as I said. And I think COVID is as good a time as any to prove that we’d all be a little bit better because of them.