Skip to content
When It Rains, It Pours
Climate Risk & Construction

When It Rains, It Pours

The Impact of Climate Change on Construction  We all face competing priorities when it comes to concerns about climate change. Whatever is immediately around us or dominating the news tends […]

The Impact of Climate Change on Construction

We all face competing priorities when it comes to concerns about climate change.

Whatever is immediately around us or dominating the news tends to be a top priority. Like the recent tornado in Nashville, the fires in Australia, the record-breaking heatwave in France, or the massive snowfall in Halifax.

But it’s snow that I’m most concerned about lately, because…generally speaking, we’re seeing less of it. “Let It Snow”, a recent New York Times column almost made me wish for more winter, particularly because the author hit a nostalgic note with her reference to the joy of tobogganing, the bliss of no school on a “snow day” and the pleasures of idle chit chat with a neighbour while clearing your driveway. I miss those moments too, but my concern stems more from what we’re seeing instead of snow. And that would be rain. It appears that in many geographies, huge puddles of rainwater have replaced what used to be a white winter. So, my weathervane is up and my climate radar is on. 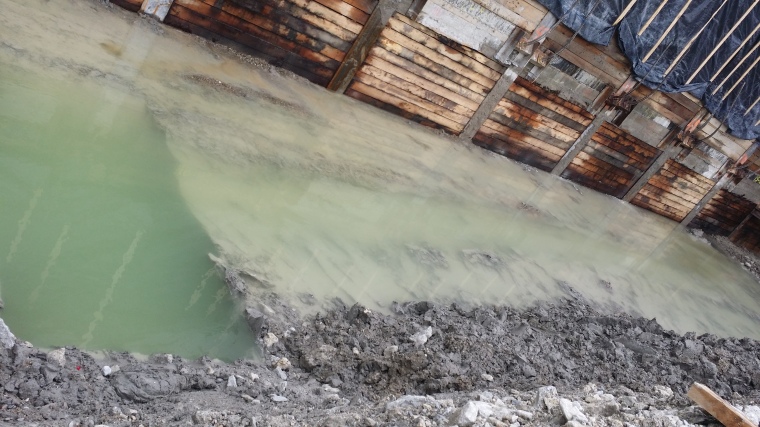 There are many weather-related reasons for a halt in condominium construction (like extreme cold, high winds, and snow) particularly at certain stages, like excavation and forming. But rain is the weather condition I want to zoom in on, because I’m being led to believe it’s the most disruptive. I wanted to see for myself whether that was true—so I asked Tridel’s Chief Estimator, @TomMalliaros to pull data from one of our larger projects, which started excavation in 2017 and is now in the formwork stage. BINGO! Sixty-seven percent of weather lost days were due to rain (the balance was due to snow or extreme cold). This is one example, but we’re going to continue to study the data and trends.

The term “lost days” usually refers to days lost in a construction schedule due to bad weather. The industry standard for weather delays is 21-26 days/year for construction activities open to weather elements. We expect, plan and budget for these using a collaborative approach with input from stakeholders (project management, estimating, scheduling, site supervision and contractors). This provides a road map, and as with any journey, it comes with twists and turns, so it is continuously reviewed (almost religiously) and re-calibrated to compensate for lost time. But some people believe this process could be refined.

According to climate experts, “weather” costs the construction industry billions of dollars every year. The reasons include damage to existing real estate, inability to pour concrete in freezing structures and excavation grounds that transition into enormous mud pits as a result of significant rain.

The standard practice in construction, is to “build in” lost days by looking backward, not forward. Increasingly however, experts are saying that unexpected and extreme weather can look quite different than historical averages and is proving to be more unpredictable. Construction is being encouraged to catch up to other more progressive industries like agriculture, where forward-looking scientific methods are used to build schedules with more accuracy.

In the construction world, there are new developments tackling this space, like weather intelligence tools Climate-i Construction and Jupiter Intelligence to name a couple.

Time is money. Where there’s substantial financing involved, there’s usually a significant amount of risk. Some insurance and risk management firms believe that gathering more data about weather and buildings will result in improved risk-taking. This should translate into lower financing and insurance costs.

There are also construction management software programs that integrate with weather systems—however, they don’t extend far enough. We’re currently experimenting with one that uses a number of data sources, including the National Oceanic and Atmospheric Administration (NOAA), to provide hyper-local weather data that forecasts up to seven days.

As with all new endeavours, there are supporters and naysayers. Although the industry is changing, some of those who have been in it for decades and were blessed by good markets maintain a wild west, “cowboy” mentality. They believe they can build through almost anything and be successful. Their view is that the cost of taking precautions doesn’t justify the savings. I’m not sure they can continue to have that level of confidence.

The industry has been stuck

Believers like Paul Little see the value. He’s CEO of Alston Construction, a large U.S.- based company that often builds in bad weather. He is starting to see a giant industry that uses antiquated systems move “toward a more data-driven world where rain, wind, or heat can be priced into a contract using the best available science.”

Believers also envision using data to look forward in other ways—predicting that data tied to building location will not only help guide construction planning but will also track and improve how well buildings withstand conditions over their lifetime. Think of Moody’s, one of the world’s foremost credit rating agencies, which acquired a majority share in leading climate risk data firm Four Twenty Seven (427) last summer.

They saw an opportunity to incorporate climate risk into their business, which is economic modelling and credit ratings. We should all be doing the same—and doing it now. According to Moody’s chief economist, climate change is “not a cliff event. It’s not a shock to the economy. It’s more like a corrosive…[that is] getting weightier with each passing year.”

If you fail to plan, you plan to fail

So, we should be preparing. Major rainfall is already taking the place of snow in some areas, and there’s more to come. What happens as temperatures rise? Many of us are becoming increasingly concerned about that as well. Moody’s certainly is. They predict that heat will continue to rise and will have an impact, particularly on outdoor worker labor productivity. We’re already facing a labour shortage, so we’d better start preparing for that scenario as well.

Regardless of whether it’s rain, wind, snow or sleet, climate change is not going away any time soon, even though some of us are working diligently on it. We need everyone to join in. If you’re still working on cyber-security you’re late to the game. Climate RISK is the new concern keeping people up at night.

by ANDREA DELZOTTO – Special thanks to contributing author Tom Malliaros who is our Chief Estimator at Deltera.