Skip to content
Are YOU Afraid of Ghosts?
City Living

Are YOU Afraid of Ghosts?

Ghosts Among Us I’ve never been afraid of ghosts, but that’s starting to change. It seems there’s more of them living among us lately. Especially when it comes to urban […]

My fear took root when I saw my first “ghost” condo. It was just how the media headlines might have you imagine it to be: quiet, dark, eerie…and for the most part, empty. But it shouldn’t have been. This ghost condo wasn’t in Toronto; it was a beautiful condominium on the Atlantic waterfront in Miami, fully staffed and operational. When I toured the dining room, wait staff in crisp whites were idly talking to each other, the dining tables had vases of fresh flowers on their virgin linen tablecloths, the chairs sat empty, and the chef had no dinners to serve. The maintenance staff, concierge, fitness trainers, spa staff, etc., were equally purposeless. I was told the condo’s purchasers were overseas investors, and that the building had one or two occupants.

When I left the condo and drove past the two-armed security gates, I observed an almost equal ratio of Floridians to condominium staff, whose home – the sidewalk – stood in stark contrast to the place I’d just walked out of. What a sad indication it was of the world we live in, and of the values that we seem to have somehow turned upside down.

Recently, Newsweek ran an article stating that the most desirable cities across the globe are being heavily decorated by luxury high-rises, and that the world’s richest people are buying them up merely as a means of storing their wealth. 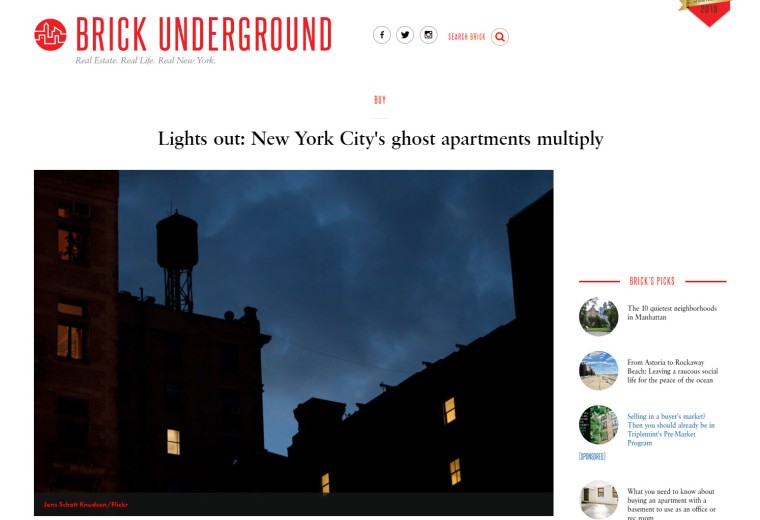 The jury is still out on this assumption. Researchers are talking to building managers and concierges, studying occupancy rates, analyzing electricity consumption – and still there’s disagreement as to how prevalent this syndrome truly is. But the interest in finding out is intense, especially in places like Toronto.

Another type of ghost we’re starting to hear a great deal about is the ghost hotel, a cousin to the ghost condo. The term is broadly used to define a house, apartment or condo owned (not occupied by the purchaser), and rented out on a short-term basis, most famously by Airbnb folks who have transformed their properties into hotels. Ghost hotels are accused of being a major contributor to Toronto’s housing crisis, not to mention a legitimate safety concern. When there are no standards, no proper screening and a sole focus on profit (how can you list a one-bedroom that sleeps eight?), you’re bound to end up with some degree of chaos. Homesharing isn’t new and isn’t necessarily dangerous. It’s the way we’re going about it that’s broken. (That’s another post in itself.)

This culinary phantom is relatively new on the scene. With the combined trend of cocooning, a rise of single occupancy homes and the convenience of food being a click away with Uber Eats, DoorDash or Foodora, some restaurateurs are seriously considering whether bricks and mortar ought to remain part of their business model. The relationship consumers have isn’t as much with the restaurant as it is with the food delivery company. The model we’re seeing now is food delivery companies reaching out to ghost kitchens to fulfill orders to people’s doorsteps. According to Restaurants Canada, this removes a significant portion of the financial equation: labour costs. Another benefit is the elimination of increasing rent costs by removing “front of house”: there’s no more need for expensive, desirable real estate, since foot traffic is irrelevant. The icing on the cake for these New Age restaurateurs will be the data the delivery apps generate, delivering valuable insights regarding customers’ needs and preferences.

Consider Sweetgreen, the “fast casual” restaurant chain specializing in salads. Now with over 100 locations, Sweetgreen’s “3.0” model utilizes a mobile tech strategy and features orders taken via tablet. Says the company’s co-founder and chief executive Jonathan Neman regarding food delivery apps (even though their model is slightly different), “It’s kind of like being on Amazon, [I think] they’re dangerous. They’re going to decimate restaurants.”

In 2018, Sweetgreen created its Outpost program, with shelving units for food drop-off in apartment buildings – “a frictionless nirvana” where “there are no delivery fees and no awkward interactions with the assembly line…orders that can be prepared in an off-site basement kitchen, cutting down on real estate expense and delivered efficiently by a single courier.” In 18 months, Sweetgreen built almost 700 Outposts. They see the potential for lobbies to turn into million-dollar “restaurants.” We had better think about the purpose and design of our community amenities.

Given the decline in traditional bricks and mortar, it isn’t surprising to see ghost malls starting to emerge. The American Dream mega-mall in New Jersey, for example, represents an attempt to exploit the shift that our social selves prefer to experience things rather than simply buy them. As with most new endeavours, ghost malls need time to scale up (and fill up). In the meantime, it translates to a lot of under-utilized space. Three million square feet, to be precise.

Jersey’s American Dream isn’t actually a mall. It’s described as a “destination for style and play,” although I’d say more like “a destination for play, with a sprinkle of retail.” As for the latter, one of the sprinklings is the popular candy store IT’SUGAR, ensuring that parents never have to worry about their kids running out of steam. And while American Dream is south of the border, its developer isn’t. That would be Triple Five, the Canadian conglomerate.

How Canadian, in fact, to have a National Hockey League-sized rink within the mega-mall, along with 5,500 tons of real snow for a 12-storey ski park (the largest indoor skiing in the Western Hemisphere), a Nickelodeon Universe theme park (with the world’s steepest drop coaster), Angry Birds-themed mini-golf (the first in North America), an anticipated Dreamworks waterpark (with the world’s biggest wave pool), an aquarium (the first in New Jersey), Legoland, KidZania (a miniature city run by kids, with its own currency), a commercial-sized plane, and live rabbits hopping around in a field.

Essentially, American Dream has brought the outside world in. Look, I’m a mom of three, I have a job, I’m running around all the time–I’m all for finding ways to get things done more efficiently, and lord knows I appreciate one-stop shopping. But the truth is that today, we don’t see enough of the outdoors as it is. Maybe I sound old, but I believe some things – like ski parks, roller coasters and bunnies – belong outside. And, yes, for those wishing to cast the first stone, we have had putting ranges in our communities at one time or another.

I do understand that we always need to try different approaches – and when the reports say that a “$5 billion dollar not-mall is opening while the mall is dying,” it becomes clear this isn’t just a mall. But here’s the rub, according to New York Times critic-at-large Amanda Hess: “A new mall can feel a lot like a dead one. As department stores retreat, they have left ‘ghost malls’ in their wake, complexes that lack the center of gravity to pull townspeople in but that live on in the form of [YouTube, selfies and Instagram].” And perhaps the biggest concern is the fear over what such places actually stand for. “It’s not a mall,” says Hess. “It’s a performance piece ruminating on the corporate takeover of nature and society.”

For the most part, people build things with the aim to make a profit, yes, but also with the good intention to deliver on what they believe people will want and use. Even if the vision of what they’re building is far out and may take time, developers have learned to trust that the right product in the right place will deliver on a “build it and they will come” promise. And I’m fairly sure they will. When my kids read this, they’ll be begging to go to American Dream. And one day, I may take them. What I’ll be cautious of, however, is the added responsibility to remind them of the importance of bunnies in their natural habitat, the beauty of real ski mountains, and, finally, that the deafening screams from the world’s largest drop coaster really do belong outside.

“The incursion of technology into every aspect of consumption has meant that only the indolent or pathologically tolerant wait for things,” says the Times’ Big City columnist Ginia Bellafante.

I’m feeling my age yet again. Once a semi-regular customer of the online food delivery service Grocery Gateway, I’ve come to realize that I actually enjoy going to the grocery store, or stepping inside Starbucks or Tim Horton’s and scanning the menu board, even if I end up ordering the same thing every time.

But I’m becoming an anomaly. The foremost example that springs to mind is Starbucks, where mobile orders take priority and those who order in person are, in a strange irony, the last to be served.

One of the most poignant points in a recent article on Brooklyn Navy Yard’s new Wegmans arrival is that “At the same time that physical retail culture remains ostensibly in crisis, it seems to create fewer reasons to engage with it.”

Part of my wanting to physically do these things myself is the social part, even if brief, and not typically with people I know. It is in fact the simple niceties that occur among strangers that makes it so appealing to me.

It seems now that Wegmans, a much-anticipated 75,000 square-foot “destination shopping” for groceries, has delivered less than expected in terms of the customer experience. It’s no fault of Wegmans. It’s our own.

Hello, Instacart. Created by an Amazon alumnus in 2012, this app-based grocery service gives you the freedom to do your grocery shopping from your couch, car or wherever else you might choose, or even to have someone else do it for you – and the food will arrive in two hours or less. This might make sense in smaller cities that aren’t car-reliant, or it might be useful for seniors. In any case, it appears the idea has caught on. If the Wegmans aisles are any indication, we’re learning to love professional-grade shoppers that can take the friction out of our food buying. But for those of us who still like to experience the stores ourselves, we find ourselves on an unfamiliar Autobahn, competing with the scores of virtual “shoppers” racing through the online aisles on their phones, rapidly filling their carts and confirming their orders.

“The act of turning grocery shopping into an occupation threatens something larger – we are losing a way to bridge differences in a world already collapsing from its stratification,” says Bellafante. Sociologists like Ray Oldenburg emphasize how important “third places” are to us – places where we spend our time after the “first and second” places of home and work. But as the latter two increasingly become one and the same, “third places” like those mentioned above – the grocery store, the coffee shop – become ever more important. It’s these places that allow us to continue to have the real and personal interactions that let us know we belong, and that each of us is part of something bigger. I want to know that we will continue to live in a city, and a world, in which, even if we don’t have a large social network – even if we have no social network – we can still order a coffee, exchange a few words and a smile with a stranger, and be reminded that we’re not alone. And I know I’m not alone in that.