Skip to content
Invitation lost in the mail
City building

Invitation lost in the mail

I asked my 12 year old son what he thought of the film. He said “I don’t think they showed Tridel’s side fairly.” I repeated the question. “ If YOU weren’t […]

I asked my 12 year old son what he thought of the film. He said “I don’t think they showed Tridel’s side fairly.” I repeated the question. “ If YOU weren’t YOU and I wasn’t your Mom, what did you think of the film?” The words blurted from his lips. ”I think Tridel looks pretty bad and that people lost their homes so others could make money.” This was the response I expected most people to have. Most people that is, that don’t know the intimacies of politics and housing in our city.

The film is called Unarmed Verses, part of Toronto Hotdocs festival by producer Charles Officer. It’s about a Toronto Community Housing neighbourhood called Villaways and through the eyes of Francine Valentine and her peers, shows talent and promise, along with the struggle that accompanies a revitalization project such as this. Displacement.

I am the granddaughter of an immigrant that left Italy and came to Canada in 1920’s to live a better life. Like many others, he left his family abroad and got settled before they joined him. He worked in mining for several years, before being given the chance to utilize his skills as a stonemason in Canada. It wasn’t long before he was laying bricks.

I am the daughter of a man who sacrificed completing his own education, (even a scholarship to play hockey for the Detroit Galt Red Wings Farm Team) in order to support his father and work along side him. Together they built houses, plazas and rental buildings. This ultimately evolved into becoming one of the most renowned family business condo developers in our city. Tridel.

My father was an entrepreneur, you see. He took risks, worked hard and always strived to do more. He built some of the first non profit housing and daycares in this city during the 1970s. When condos were legislated he did his part to make our city more livable and to protect our resources, way ahead of any notion that the smarter thing to do was to build up, not out. With all his success however, he keeps the lessons from his upbringing top of mind. Lessons such as treating and respecting laborers as well as you treat everyone else. Lessons like never resting on your laurels and continuing to work even harder to make it better next time.

I have always been proud of what I do and what our company stands for. But for a brief moment after I saw your film Mr. Officer, I wasn’t. And that felt wrong. When I saw the film for a second time, and took my son, “wrong” deepened. To not feel good about yourself is one thing. To have your child not feel good about you or what you do, is a very different thing.

The default response would of course be, to fight back. That’s not my style. The reason I saw the film in the first place (two times in fact) was to listen and to learn. I am a firm advocate that we can only do better when we know better. As my tweet indicated – we can all learn from this film. And with all due respect Mr. Officer, I hope that you realize that this might even extend to yourself. 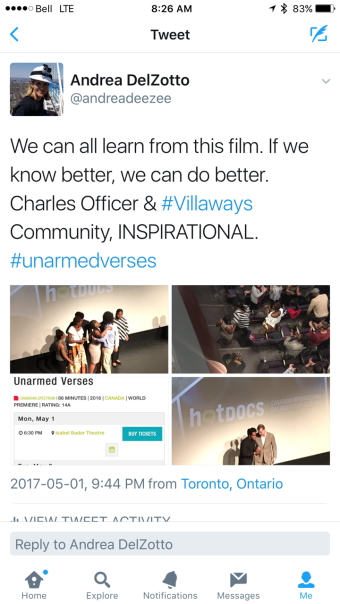 A documentary might affect an audience even more so, if it shows multiple sides of a story, rather than one. While it should force us to contemplate serious issues such as these, it should also propose answers, or provide the facts so that we may contemplate one that might succeed. That’s difficult to do with only part of the story being told, albeit an important part.

My son wondered what I would have done or wished for had I known the film was being produced beforehand. If we were permitted the opportunity to participate in some way (beyond the filming of our employees without their acknowledgement) we would have wished for a few things, in fact. To have shared our involvement with each community that we build in and what we learn from them. To have shared the obstacles, both financially and politically, that are the realities and hurdles that we are challenged with. And to have shared the results of the equation when you place these two pieces side by side, which doesn’t always equal perfection. But it doesn’t mean that we don’t try. And it doesn’t mean we don’t get a lot of things “right,” and strive to do more so with each subsequent community. We would have wished to have shared the outcome of Alex Park TCHC revitalization Phase 1 and the joy and pride that new residents expressed as we celebrated last Fall, during their street ceremony. My wish list is not so that we come off as the hero. Far from it. It’s to ensure that as you so eloquently displayed in your film, to ensure that we hear all of the voices that matter. It is only then, that we can we work together to find solutions. Imagine if Francine’s voice was never heard?

During the Q&A following the film, you mentioned that you’d invited Mayor Tory and TCHC to the film, but they didn’t come. I myself, didn’t receive an invite. Unless, of course, it was lost in the mail. You mentioned that Shelley Caroll came – but questioned was it enough to show up in support of something because it’s a good cause? They actually need to DO something more. I did show up. And I am doing something more.

I have gone to more than one Toronto community housing neighbourhood – and not just as a result of revitalization. I have had friends that lived in Toronto Community Housing. I have walked their streets, met their residents, and listened to what they have to say. But it goes beyond listening. They have cooked for me, they have welcomed me, they have laughed with me. I have always been a proponent that these neighbourhoods, have so much to teach us about community. And we are community builders. Yet, we cannot do it alone, nor without these lessons and reminders of what community truly is.

Just like my father evolved what his father did. I am evolving what my father does. It is no longer just about building buildings. For us, it never was. It was about lifestyle and community. But the definitions have changed. Community is not something we build. It is something we do. And it involves everyone that is involved, before, during and after we touch a place that people call “home.”

Mr. Officer, my ballot rated your film 5 out of 5. I want to personally congratulate you on bringing awareness to something that won’t be solved unless we all work together and listen to ALL voices. I would welcome the opportunity to share with you, mine.