When will Toronto get “there?” As the good old saying goes, “good fences make good neighbors.” In the vertical world, the likely translation would be that good balcony barriers make […]

When will Toronto get “there?”

As the good old saying goes, “good fences make good neighbors.” In the vertical world, the likely translation would be that good balcony barriers make good neighbors. A quick Google search on balcony privacy will give you 88,900,000 results on the various options. And Trip Advisor follows suite rating rooms that have insufficient balcony privacy as inferior. Our mentality seems to be, “the more privacy the better.”

Despite our digital connectedness, it seems we remain very much in love with our disconnectedness in the physical world, and we haven’t caught up in terms of being more “social” in a face to face context. It’s a bit of a contradiction to our country’s top global rating as one of the most “friendly and welcoming” places in the world.  The barriers and privacy screens nonetheless,  may be just a symptom of a larger issue.

Personal space is something we covet. It’s our norm. Think of your distance from someone using the ATM, or the spacing of people sharing an elevator cab. This isn’t the universal rule though. Different cultures have different norms, of course. Take Cairo or Sao Paolo for example, cities of 16M and 20M respectively.  It’s understood and accepted that no space means no (or little) privacy. On buses, sidewalks, restaurants, people are physically close together, which correlates to their emotional connectedness. Researchers who study this in depth cite that you’d never see someone on transit in Brazil wearing headphones or gazing at their feet. They are tuned “in” (not out) and highly engaged with each other. Sounds foreign to us.

And so to bring it closer to home, and to the GTA specifically, while we seem a far stretch from the examples above, we can console ourselves by comparison with Vancouver, whose reputation for  unfriendliness, far surpasses our own. One thing we do have in common however, with our beautiful Canadian city on the west coast, is the number of people we both have living in high rise environments… alone. And the results are in. They do seem to be  lonely. But one Vancouverite is determined to challenge the notion that dense urban spaces, (even vertical ones) have to be isolating. Charles Montgomery claims that loneliness isn’t just a behavioural problem. It’s also a design problem… which brings me back to balconies. And their design.

I recently attended a Design Review Panel for a new condominium, where terraces and balconies and terraces are stepped and more closely connected than your typical scenario. The design would potentially allow people to peer into each others balconies, possibly even see each other.  The concern of privacy immediately surfaced. After all, this was an exclusive use common area. The interesting (and exciting) observation however, was that the panel was divided and an admirable diversity of thought prevailed.

Some were of the opinion that a lack of privacy is part and parcel of urban living. Even in single family homes for example, opportunity for voyeurism increases in winter months, when trees and foliage are sparse. Others were steadfast in their belief that there’s an innate responsibility to build and enable privacy into the design of people’s homes, especially in a condo setting. The architect for the community was from Europe and a little perplexed by the consideration that we bestow upon privacy. After further debate, the review panel exclaimed that while it was an enviable and cohesive concept, the reality remains that privacy concerns have a significant impact on our design, and that as Torontonians, we’re just “not there yet.”

But I can’t help but wonder when (or if) we’ll ever get there on our own. Sometimes we need help getting there. Recently at a  Canadian Urban Institute event,  Gia Biagi, an urban planner in Chicago, and Sr. Director at Studio Gang, shared two great examples of the built form affecting people’s behavior and actions. The first was a “reimagined” police station that utilized a shared, community amenity basketball court to transform the station into a community resource.

The second was one nearer and dearer to my heart.  A highrise community named Aqua, renowned for design that enabled social connectivity between residents. “Exo-spatial” is the term Studio Gang coined for a strategy they use to create more “socially connective” tall buildings.It extends their living space to the outdoors.

The balconies at Aqua have intentionally been designed as large social spaces. They are visual connections between adjacent suites to facilitate informal ties between residents. According to Gia, it’s worked. The design has even been the catalyst for a few “love connections” in the community.

Studio Gang recognizes that tall buildings have a responsibility to be “social connectors” and that design, both within and around a highrise, can be a critical ingredient.  They also predict that this satisfies a strong need of the millennial generation  that seeks out interactions, both on and offline. 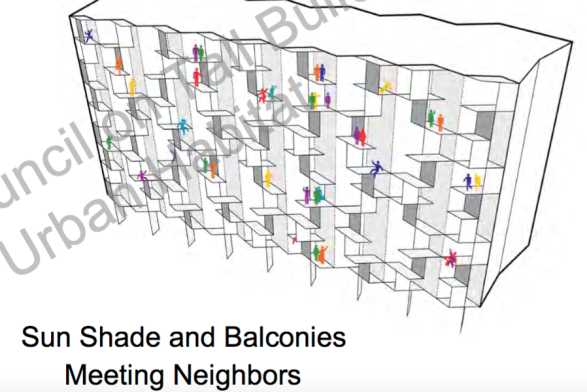 Like most things that are new to us, we need to walk before we can run and it’s often a good idea to learn a little bit more about something that’s so different from what we know. Well, fate would have it that a family trip this summer has us heading to no place other than Chicago. And while some people say there’s no such thing as fun for the whole family, I’d argue otherwise. You simply have to put some thought behind it. While my boys think we’re primarily going to the Windy City to see Wrigley Field, eat deep dish pizza and visit Millennial Park, I think a trip to 225 N Colombus Drive (aka Aqua) as well as a tour  of Frank Lloyd Wright  can ensure that fun is had by all. Including yours truly.