I recently had the privilege of listening to my friend Luke Anderson rehearse his Ted Talk with me about accessibility in our city. He considers himself  “gifted” with the opportunity […]

I recently had the privilege of listening to my friend Luke Anderson rehearse his Ted Talk with me about accessibility in our city. He considers himself  “gifted” with the opportunity to share his perspective on the importance of designing and building accessible spaces with other people, the city and the world.

I first met Luke at an Urban Land Institute event a couple of years ago – his focus then, was on a project called stopgap that encouraged stepped storefronts to install ramps throughout the city that would increase accessibility. That was just the beginning. His emphasis is on creating spaces that everyone can enjoy. As a large developer in the city, and being responsible for a significant amount of buildings, this led me to ask myself what we could be doing better? And how much better? And so I invited Luke on a “condo challenge” with me. Together, we toured one of our own buildings just to see how easy (or difficult) it was for him to visit.

We didn’t do too badly, but it was obvious that there were some easy quick fixes that could make his experience better. And it’s not a huge stretch of the imagination to see that what works for someone in a wheelchair will also work well for an elderly person with a walker , a parent with a stroller, or someone with arms full of groceries. Here’s a few pieces of the “low hanging fruit.”

There are some items above that are mandated, but some that go above the “bare minimum” which is what we strive for.

The legislative changes to the 2012 Building Code, affecting new buildings as of January , 2015 were the following. Their intention was to promote accessibility for people with a disability.

The provincial Building Code also mandates a barrier-free path of travel in buildings. This sets out access and circulation requirements within common areas. These may affect things such as widths of doorways and corridors, ramps, turning spaces, even tactile walking surface indicators at stairs and edges, for pedestrians with low vision. etc.

Another thing we’re trying to change is the symbol of access we’re using in our communities. The one we’re most familiar with is almost 50 years old, created in 1968 and is the International Symbol of Access. The majority of  people feel this symbol just sends the wrong message- Not to mention that it isn’t representative of 97% of the total population with disabilities, since it’s primary focus is on an assistive device.  Our own previous Lieutenant, Governor David Onley created a competition a while ago, to bring it into the modern era. The stick figure with a dominant static chair, for starters, is stationary. The reality is , as echoed by my friend Luke, that people in wheelchairs are mobile. They are not “confined.” In fact, one amazing speaker at ACMO last month, Warren Macdonald, the first double above-knee amputee to reach the summit of Africa’s tallest peak, Mt Kilimanjaro shared with the audience, that the only time he truly considers himself to have a disability is when he’s looking for a parking spot 🙂

The five marked changes on the new icon, represent a person that is active and engaged, as they truly are. Just have a look at Warren to see for yourself. 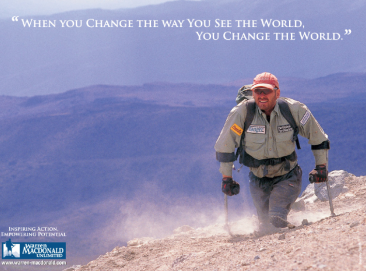 These are all positive signs of change.  But as with most things in life, you take one step forward only to take two back. I recently drove by one of our downtown communities with my 11 year old to check out something Luke had pointed out to me. This was a community that had a high-rise as well as town homes. Unfortunately, all of our forward thinking and good intentions weren’t applied to the environment of the latter. The town homes, as he pointed out, were not “visitable” to him, or anyone similar. I explained my disappointment to my son.  He cheerfully (and innocently) brought forward a solution. If he lived there and Luke visited him, he would simply carry him up from the bottom of the steps to the front door.  The only problem with that, I explained to him, was that his friend wouldn’t be able to act independtenly without the help of someone else for access. He was quiet. We both were. Silence seems to expand with understanding. The silver lining is that no matter how long you’ve been doing something, you need to be open minded and never stop learning.

Hopefully none of us will be forced into a situation that will deepen our own understanding of what its like to be catapulted into a world with unforeseen barriers.  Hopefully our own empathy will drive us to build better communities and cities around the world.

There are huge opportunities in place to enhance design which makes life easier for ALL of the residents in the built environment. Better lighting, signage and access are great examples of how inclusive design makes for a better experience and I’ll even throw it out there, a better value for a property.

Change is hard. But it’s possible. Always try to remember the relationship between between smart, change and willingness to learn.  The “smarts” we typically define, are just part of the equation.  Even the smartest person in the room, can be challenged by change when it takes them out of their comfort zone. If you have one (or more) people of that mindset around you, tell them to visit a community and watch just how many people use the accessibility push paddle to get into the building.