Skip to content
Day 25. C’mon cowgirl. Pack it up (& suck it up)
Condo Living

I was looking forward to the annual community summer BBQ last night that the Property Management and Concierge welcomed us to.  Sadly, we had to decline due to my conflicting night class. It was so disappointing to miss the chance to get to know more people before it was time to move out. I was almost even starting to consider it a pseudo-farewell party since the countdown is on and we’ve started packing up.

The boys were super helpful this morning as we gradually started packing and bringing things back home. Bit by bit we lugged things to the car and delivered them back home with a bit of an admitted heavy heart each trip.  Suck it up, cowgirl, was my affirmation, as I know it’s been a great ride and everyone has supported the adventure. Still, it somehow equates to that end-of-holiday feeling you dread when it’s time to pack your suitcase and go back to reality.

Oddly enough, I discovered that despite my light packing for the condo, there still remained unworn items of clothing in my closet. It amazes me that even in what I thought was minimalism there was remaining abundance!  I am determined to purge when we get back home. Although… I really think I can start now.  I have moved four times in my life and my mother’s advice each time has been the same  – if you don’t use it or don’t need it, don’t bring it with you. Otherwise, you’re just bringing the excess with you.  My mother is also, often right.

Just last week, after the boys graduation, we visited Grandma and Grandpa’s condo, not far from our own.   My mother is quietly understated, simple and sophisticated. She is also a minimalist.  Her style is classic,  clean and timeless. This is true in many aspects of her life. She rids herself of clutter not only in her home, but also in her wardrobe, her diet and even her relationships. She has tried to teach me to do the same.  Mostly everything she does is functional and sensible. Trust me, it’s a tough act to follow.

We recently visited a friend’s new home together. When we left, while we agreed that it was beautiful in so many ways, my mother asked, “Where do you think they’ll curl up on the sofa and watch tv with a cup of tea and a blanket?” Just one example of her practicality.

While I’m honoured that people see many resemblances between the two of us, I have to admit that there are also ways that I’ve fallen a bit far from the tree. Particularly when it comes to domesticity. As I watched my boys play in her family room last week,  I could see easily that my own mother had taken to heart the rule of no single-purpose toys.  With multi purpose toys always nearby (stored somewhere neatly of course) , there was never a shortage of clean, compact, clever and creativity-inspiring sources of fun.

In an attempt to take advantage of the diversity the neighbourhood cuisine had to offer in our last few days, we planned a farewell dinner tonight with our friends that live in the building.  Despite our good intentions of branching out and trying new things (I had my heart set on Korean Kowboy), I was overruled and once again, we ended up agreeing to the Brazilian steak house around the corner. Once a carnivore, always a carnivore.

On our way out, or I should say UP, to pick up our friends that live two floors above, we heard the first real noise from other residents. Actually, it was from a bird. A parrot in particular. Not while inside their suite however. It was in the corridor.   This was a familiar sound to our friends who shared the floor with it, and they generously knocked on the door so that we could meet their chirpy friend. There was no answer, and much to my six year old’s disappointment, the peep hole he insisted he be raised up to, didn’t give him much of a view either. This was fortunately the closest we got to nicky nicky nine doors in the condo.

Dinner was amazing. Lots of fun. Lots of silliness. 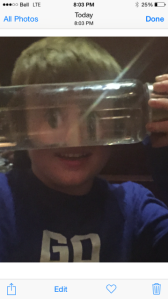 But it was also bittersweet, as I was reminded that I would be missing all of this far too soon.  The ease and convenience of so many wonderful things. Friends, food, entertainment and a vibrant streetscape to immerse yourself in anytime. Most importantly though, friends. Particularly when the day has been long and you need someone to help carry the heavy load.