Just like the sore sight of finding your hotel bill slipped beneath the door on the morning of check out, I received an email in the wee hours of the morning to confirm our upcoming departure. […]

Just like the sore sight of finding your hotel bill slipped beneath the door on the morning of check out, I received an email in the wee hours of the morning to confirm our upcoming departure. Already? So soon? While we still had over a week remaining, it’s gone far too quickly. To be honest, we all feel as though we’re just getting settled. We’ve even started to get used to taking the dog down the corridor, into the elevator and out the lobby door rather than quickly opening the backyard door for a quick bathroom break.  It’s amazing what you can get used to in a relatively short time.

I quickly emailed back just to see if there was the possibility of extending for a few days, perhaps a week. I kept this to myself, of course.  Fate would have it that there was no chance. They had a reservation booked shortly after our move out but would let me know if there was a cancellation.

The day began with a construction lesson on forming, as we woke up to the sight of the crane lifting massive objects outside our window.  And contrary to the theory of getting used to things that surround you regularly and the newness wearing off, we never seem to tire of the activity outside of our window. It’s called “hedonic adaptation,” our innate capacity to become habituated or inured to most life changes. Think of how small changes can delight us – try rearranging furniture or changing placement of photos on a wall in your home.

When my boys asked “What is that Mommy?” I had the pleasure of explaining fly forms to them. I had the additional pride of telling them that it was our own company, inspired by insight of our own construction engineering crew, that created – Aluma systems. Decades ago, in 1972, the Aluma beam evolved the technique that they saw happening right outside of their  window this morning. It’s a very cool feeling to show your kids first hand, an innovation that you (and your family, your company) have been a part of in some way. What used to be a very manual, heavy and dangerous system, of pouring concrete to set floors, evolved into an incredibly fast and safe technique, by replacing wooden and steel structures with a far lighter material – aluminium.  It led to tremendous efficiencies, allowing construction crews to pour a floor of concrete in one week.

We headed down the elevator in the morning to our first real maintenance announcement. Water Shut Down. I may have been the only one to get excited by this posting, but I felt as though I was getting the opportunity to experience real condo life. I wanted to live every perk as well as every bump along my journey. This is what all of the other residents go through. The building was working to upgrade the water distribution systems. I hadn’t noticed any problems with the water whatsoever, so this was a surprise to me. Nonetheless, we’d have have to plan accordingly tomorrow.  To be honest, I’ve never had this interruption at my house, so I’ll have to think through its impact. With apologies for the short notice, I’m not sure what advantage more time would have provided me with.

With two of the boys now well into their every day routine and off to baseball, it left my older son and I with a night on the town. 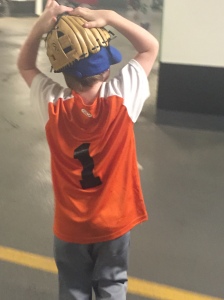 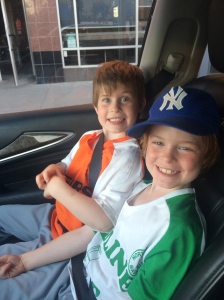 We had the pleasure of having a dinner for two, just steps away from our door. 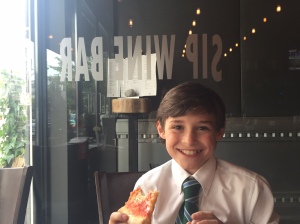 We came home and discovered that the pact that was made to fully utilize the balcony and the beautiful view to complete the day and share a recap isn’t restricted to the people who originally made it. It can be shared by anyone, even one’s self. That evening, it was shared with my 11 year old son.  Together, we enjoyed a beautiful sunset.

Topic of conversation… construction, of course.

We noticed some workers were still on the site across from the balconies, as we saw their silhouettes quietly moving. They were working quite late. Their motion hinted that that they were likely finishing the concrete floors that were poured and they had limited time to do so. He really liked the name of the machine they use to do this – a helicopter. Turns out that a lot of learning (and love) can happen anywhere if you take the time to do it.  Even on a balcony.

And as their silhouettes got smaller and smaller and finally faded away, we too, called it a night.