Having friends in the same condo can be great, especially when you’re in a bind. Which my friend was.  Her cat sitter bailed.  I was more than happy to help […]

Having friends in the same condo can be great, especially when you’re in a bind. Which my friend was.  Her cat sitter bailed.  I was more than happy to help her out and check in on her feline family. Condo perk to have help just two floors away 🙂 and what a thrill for my boys, who would love a cat but their Dad “says” he’s allergic.

It’s always amazing to see how other people live. Particularly when they’re in the exact same suite layout as you. But my friend’s suite was different.

Not only did they do some custom work (like a built-in kitchen table that extended off of the island, and clever shelving below) , but it was lived in! I missed that feeling.  Ours was still very minimalist and a bit cold. I even realized that I missed something I didn’t think I would. Photos.  Framed pictures on shelves and photos hanging on the walls. It’s funny – I didn’t think it would matter, since we were all together physically, but it definitely warms up a home. So do plants.I missed my plants. Even though I was terrible at taking care of them. I missed my library of books. Even though I never sat in there and read them. These things just make a place feel more like your “own.” This proved to me that you can achieve this, no matter what the size of the space.

They even did some custom work on the balcony that warmed it up and made it inviting. Our balcony, only two floors below, had two plastic chairs and a table. It served the purpose I suppose. And the view is still the same.  I think I can count on one hand actually, the number of times that I’ve sat on my patio furniture at home over the past three years.

We drove by our old neighbourhood today and noticed balloons, festivities and crowds of people everywhere. It was the annual Spring Sidewalk Festival and the boys really wanted to explore… so we parked the car. Cotton Candy, prizes, Menchies. I was homesick. 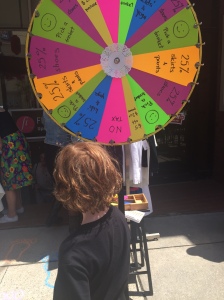 I’d also been promising that we’d also walk to toys-r-us one of these days, since it’s basically across the street from our new condo. And they’ve been so awesome and accommodating, I felt as though they deserved a “house-warming” gift of their own, keeping the no single purpose rule in mind of course.  Lego rules! One of the boys took it a step further, and proved it to be multi-purpose as he used the box as a chair (kind of).

Turns out that cats seem to be reappearing in my life recently.  While I did weekend laundry and the boys watched one of their favourite shows – Artzooka – it turns out there IS a purpose for that extra lint trap in the condo! They found an amazing art recipe that calls for lint… and lots of it. And so the boys would like me to continue to do laundry, forever. (Guess what boys? I will be. It’s never ending for all of us and even in a smaller setting, the loads don’t seem to be getting any smaller.) So, in the effort of building up some cat fur, I’ll be throwing in another load. You know what they say… one man’s lint is another mans’ treasure.

One of my best girlfriends came over that evening to have some “girl time” and to see our new place. Ironically, she was trying to escape her own neighbourhood’s street party. (See? When you’re in a single family community, you need to create a date to get together. In a condo, we’re always together!)  She loved the simplicity of our place. There was one little thing that I did notice however.  With the boys watching TV, playing lego (and being loud as boys often are), we didn’t really have our own “space” to hang out. I asked her if she wanted to sit on the balcony, but it was a little windy.  Funny enough, that was the perfect segue for her to share that she never uses her patio furniture at home, lol. And so, we ended up hanging out in the boys room, lying down on the bottom bunk, just catching up. We felt like we were in University again.

Our goodbye was followed by the flick of an “all off” light switch and a simple turn of the bolt on the front door, after which, I tucked in the boys and went to bed. At home I would have been checking the basement, (possibly peaking in closets and sometimes even under beds) locking multiple doors and windows, and keeping a light or two on, with my husband away. But not here. With the concierge right below and neighbours beside and across from us, I felt safe.