Skip to content
Day 12. Breaking the rules & trying to fit in.
Condo Living

As much as I miss the dog, it is a bit easier without him while I’m on my own with the boys. And I know it’s the right thing to do. […]

As much as I miss the dog, it is a bit easier without him while I’m on my own with the boys. And I know it’s the right thing to do. I recall a  newstory about “free range” parents in Maryland this year who had some negative media for the freedom they gave their kids.  My six year old has as little unsupervised freedom as possible. He’s a bit of a MacGyver and gets into anything and everything… mostly mischief.  I can’t take any chances.

With less of the usual morning rush, we had more time today.

I even had time to attempt incorporating some family feedback into the blog. It didnt’ go well. Apologies for my leading questions. As you’ll see, the ipad is tough competition. I’m thinking a better method will be to attach go-pros to them.

So far I’ve learned about parking garage etiquette and pet etiquette. But that’s only the beginning. Heading down the elevator this morning we noticed signage in the elevator regarding “balcony etiquette.” I was interested, to say the least. I had a balcony “concern” last week and this helped me to understand the potential cause.  There was water dripping onto my balcony and I now realize it was probably the result of the resident above either cleaning their balcony or watering their plants. Not that they can’t be done, but there’s a right and a wrong way to do it. I think the sign has been a gentle reminder, because it seems to have stopped.

My son came home from school today with a folder of artwork from the year.  He had one assignment on sketching out what “peace” was to him.  Peace, to him, was bouncing on the trampoline with his brother. I immediately felt regret that he was likely missing the backyard and the trampoline. When I looked more closely at the art though, I noticed that the structure that he drew looked more like a condo than a house. Maybe he’s combined the best of both worlds. 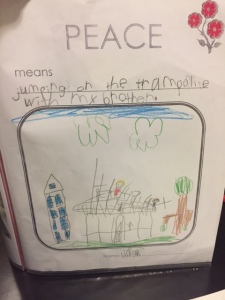 And just when I thought things were going to get dull and I’d have less to write about, my parents came over to see two of the boys while  I took  my eldest to baseball.

I called the concierge to let him know I was expecting visitors, but I was too late. The concierge then asked me to please tell my guests not to speed through security in the future, and that they must provide their license plate in the event anything ever happened to their car while parked there. I explained to the concierge that this was my dad, nearly 85 years old and that he was just very excited to see his grandkids. I then apologized on his behalf and was put immediately at ease as he chuckled and shared that it’s usually the parents of the residents that he has challenges with. I got in touch with my mom and asked  her to please relay the message to Dad that I’m trying to “fit in here” and he should really try to follow the condo rules next time he visits. She explained that he likely can’t even remember his license plate. Who can? Technology is making all of us a little duller.