Skip to content
Day 8. No Driveway? No problem.
Condo Living

Day 8. No Driveway? No problem.

Here we go. Week 2. More settled but still adjusting and still taking repeated, frequent elevator rides up and down. This seems like a perfect time in our journey to dispel […]

Here we go. Week 2. More settled but still adjusting and still taking repeated, frequent elevator rides up and down. This seems like a perfect time in our journey to dispel a very common myth.  The myth that it’s the children in buildings that are responsible for pressing all of the elevator buttons, for some disruptive fun. My husband has very recently admitted to me that he’s learned a new trick.  In instances where he gets to the parking garage in the morning and realizes he’s forgotten something, (such as this morning and his cell phone) he has a clever strategy.   He rides the elevator back up to our floor and before getting off, pushes the PH level. He runs down the corridor, grabs what he’s forgotten and scurries back down the hallway. By the time he pushes the down button, he’s managed to time it perfectly so that he catches the elevator on its way back down from the Penthouse. My apologies, readers. Boys will be boys.

I was still kind of missing my old gym this morning (specifically the treadsanity class that KILLS me in a good way) and decided to head over.  While there, I overheard a couple of ladies discussing their condos.  One lady was a recent first time condo purchaser and she was commenting on loving the change in her lifestyle. Suddenly, I feel like I’m hearing “condo” everywhere. It’s kind of like getting that new car, and starting to notice it everywhere on the road. So naturally, my ears perked up. And I was so excited that I had some meaningful contributions of my own to make. I shared the news about my recent “condo swap” and we exchanged stories about manageable amounts of housework and maintenance.

One of the ladies shared that the condo she’s been living in for 7 years was recently switching over from bulk metering of utilities (which had been included in her maintenance fees) to individual smart meters that measure your own consumption. Horrifically, she told us she’ll be expected to pay several hundreds of dollars toward utility bills in addition to her already significant maintenance fees, as she’s in a smaller condo community with less than thirty suites. The Board had decided they were not reducing maintenance fees in lieu of this, since they were trying to build up their reserve fund. This was understandably frightening! I told her I don’t even know if that’s legal but headed her in the right direction to find out for certain.

What I do know for sure however, is that all of our new buildings are individually metered, and the developer and management have protocols  in place to ensure that projected maintenance fees and first year budgets consider future factors to minimize sticker shock in your subsequent years living there. Make certain if you’re considering a condo that the developer you’re dealing with takes these types of things into consideration. Of course there are adjustments over the years.  Typically, we find that the biggest variances are attributed to fluctuating utility costs.

When I arrived at work this morning, (after walking to my early am dentist appointment – still loving my walkable lifestyle!)I overheard a colleague on the phone dealing with the aftermath of the horrific rainfall we had over the weekend. His basement was flooded. Been there, done that. And I was NOT missing dealing with the consequences of mother nature. All I really needed to know, worst case scenario, was where my main water shut-off valve was.

Another friend and colleague has been sending me friendly reminders to set up our “chick flick” night in the movie room.  I’ll make a mental note to call the concierge and to book it, as my personal mission is to explore all of our amenities in 30 days.To be honest, I’d prefer to self-serve and reserve it online rather than call. A product of my generation.

While picking up one of the boys from school today, the teacher told me that he had shared his new condo story with her. She shared a tip from a personal friend of hers,  also a condo dweller. They used to rotate their toys in the storage locker every month or two, so that the children wouldn’t bore of the same small selection in the suite. Great idea! She also assumed that they must be missing the garden. (In her defense, she hasn’t seen the track outside our lobby door!) I have to share however, that they still have not been missing or complaining about their toys. If anything, play time has become slightly more creative. My youngest son pulled open the freezer drawer this afternoon, placed an ice cube in a bowl, and just watched it dissolve. 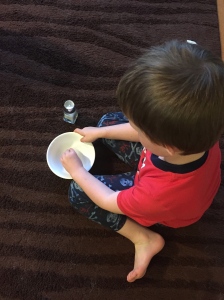 My middle son however, came home from school and told us to look very closely at what he was wearing. We didn’t see anything strange. Upon further scrutiny however, and the large hint of him pointing to the school logo on his shirt, we noticed he was wearing his older brother’s uniform. His brother from a different school! How does this happen? I quickly convinced myself that this was an easy mistake to make. The school colours are in the same family after all. Our condo swap could not and was not to blame.  But my eldest son quickly corrected me.  “Mommy, at home, we have our own closets and this wouldn’t have really happened.” He’s right. A shared closet and clothes stacked closely together, has made it easy to grab the wrong thing during the morning chaos. I will find a better way to segregate their clothes and we will ALL be more disciplined at getting everything ready the night before. Smaller spaces have really taught us that a place for everything and everything in its place is the rule of thumb.

A little later on, while I was still at work, my husband had the joy of watching more “condo creativity” sprout in our youngest son.  He asked daddy if he could go out on the balcony and play a game with him. Play and balcony are not two words that go together in our minds, but he assured him that it would be safe. My son pulled out a small piece of chalk from his pocket, and began to sketch out some numbers. (Don’t worry – it’s washable! We know that balcony’s, even though they seem to be part of your suite, are considered exclusive use common elements and belong to the condominium corporation as a whole).This was going to be huge and was not your ordinary hopscotch. This was highrise hopscotch. And thanks to technology I could be there, and share the moment.

And he kept hopping until I got home. And he hopped until dusk, as we watched the beautiful sunset from our balcony.

(Thinking of making our own personal Good Night Book for Adam Gamble’s series.)