Skip to content
Day 3. The honeymoon is over.
Uncategorized

Day 3. The honeymoon is over.

It was a morning from hell and the love affair with my new urban condo was starting to fade. We could not find uniforms. We could not find backpacks. Maybe living in two places is just too difficult. After a little investigating, it turned out that the condo is not to blame. My husband is. (Just kidding… kind of). The pants and the backpacks were in his car. Nothing that a quick 7 minute drive home couldn’t correct. Needless to say, the bus driver was waiting for US this morning.

My husband later sent me an email to complain that he tried to have a late night swim last night and couldn’t get in to the pool. Why? He thought it was 24/7.  We later discovered that it actually is 24/7. The only stipulation being that during very late hours, pool access requires an additional measure of safety, which requires the concierge to activate your fob. Wish we knew that before he went down in his robe and flipflops.

I  received a phone call from him (this means it’s serious) a little later in the afternoon. He was predictably in a panic. He had forgotten his “condo” keys and fob at work. Could I meet him there to let him and the boys in? Why not? What’s another interruption to an already overloaded and running behind work day? Of course I would. I later discovered that had we filled in our resident profile forms with Del Property Management, including the Permission to Enter Forms (allowing the concierge to provide access to those you specify) he would have been let in, in a flash. Another perk of condominium living with a concierge. 🙂 My only complaint is that the forms should be paperless. I would have filled them out sooner had they been digital.

And so as you can see… not the best day. But there’s always a silver lining. I received a really nice email from DelSuites letting me know that they do in fact have some of the things I mentioned I’m missing. Turns out that they’re following my blog and learning about me. Wish more companies were that smart. They do in fact have the extra dining room chair and the step stool that we needed. They even have a special form for people staying in their accommodations with families, that we somehow missed. 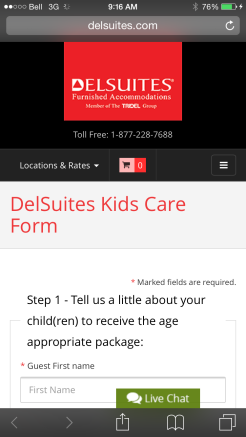 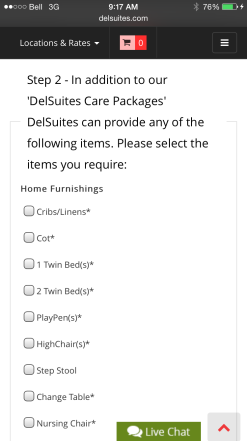 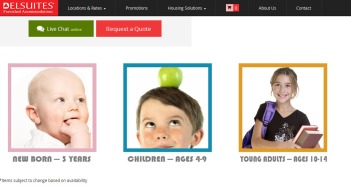 What we didn’t miss however, was the care package we received, (actually I should say that the boys specifically, received)  from DelSuites. Probably with the most important thing we were missing. The ice cream scoop. But they took it a step (or two) further and added the wow factor.  Because what good is an ice cream scoop without ice cream… and chocolate sauce…and mini m&m’s to sprinkle on top? 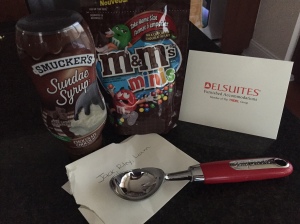 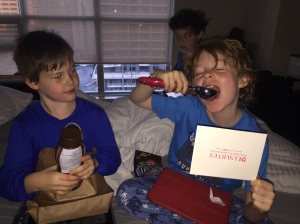 I know what you’re thinking – they did this because it’s me. Not true. Just last month, I learned of their #DelSuitesWOWfactor initiative. They make every effort when it comes to the customer experience and “sweat the small stuff.”

And so, the love affair continues. And fortunately, I’ve taught my boys to share.