I’m fortunate. My boys are a bit nomadic. They don’t tend to be attached to physical things and are always up for an adventure. Nonetheless, patience is not their strongest […]

I’m fortunate. My boys are a bit nomadic. They don’t tend to be attached to physical things and are always up for an adventure. Nonetheless, patience is not their strongest trait and so the whining began. When are we going to the “hotel?” Two cars packed and about a 7 minute drive later, we arrived.  It was a rainy weekend, but of course we drove right into our underground parking and didn’t get wet 🙂  Condo living!

Lugging the gear was easy! What little boy doesn’t love a luggage cart? And I just happen to have three of them. With an empty luggage cart to ride, another trek down to the car to get more ‘stuff’ was like winning the lottery! 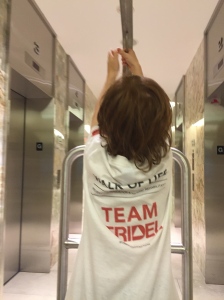 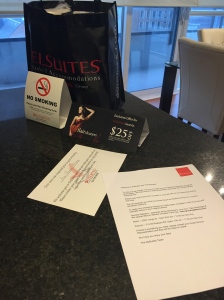 Amazing treats to keep us satisfied (until we could fill the fridge ourselves), gift certificates and more! There were also finishing touches throughout the suite, that showed an extreme attention to detail. Something that we refer to at our parent company as GLUE. Giving Little Unexpected Extras. For example, there was a tiny pack of DelSuites post-its in the Office, that my son decided to make door tags out of for everyone!

The boys (and us) were mesmerized by the view. One of them couldn’t stop staring at the players on the field and loved that they looked like little action figures. 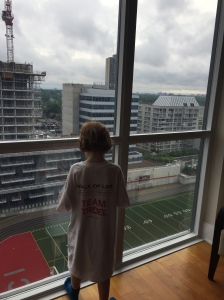 They loved the multi purpose furniture with built in storage.  They learned fairly quickly however, that it is NOT for packing brothers in. 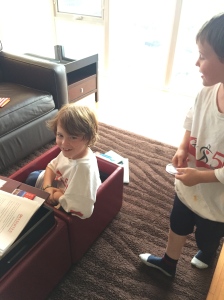 Neither are storage lockers.

After unpacking, there was one final thing left to do.  Bunk bed installation. 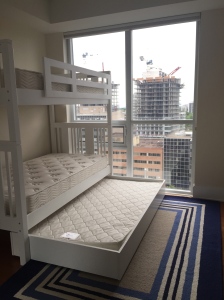 And that was the start of a very large (and ongoing) debate over who gets “top bunk.” 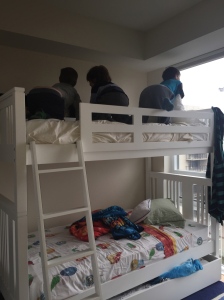 And for those of you that are curious – we did manage to get our bunk bed delivered over the weekend, as it didn’t qualify as a “full” move-in. (Small miracle).  The boys played on their iPads as we unpacked a few more things and made sure to let us know that the wifi in the condo was better than ours at home. (Not-so-small miracle. Thank you DelSuites.)

There was one small teachable moment during the move, as I heard one of the boys call out and ask, “Mommy, how do I flush this thing?”  I explained the full circle button, the half circle button and let them know that this was just one way we’re doing our part to take care of the environment. Personally, I was just quite impressed that he remembered to flush.

As settled as we could possibly be on Day 1, we took a break at dinner time and took a vote. Eat in? Dine out? It was unanimous. And so with umbrellas in hand, we went to check our new ‘hood.

On the way, one of them asked if that was all of the unpacking we had to do for the day. “Yes,” I told him, “we have everything we need now, and most importantly…” He looked up at me and finished my sentence, “We have each other.”

This was going to be a great adventure.  And a lesson that will last a lifetime.